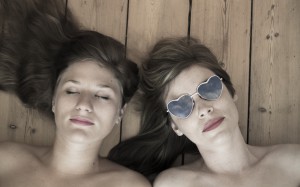 Teenage Love is pop duo Katy Gunn (Brooklyn) and Anna Lidell (Copenhagen). After meeting up in NYC, The two songwriters joined forces July of 2014 in Mols, Denmark to cook up some songs at Lidell’s family home. Between dashing down to jellyfish-infested waters and back up to the house (to dry off in the tiny bathroom sauna), Lidell and Gunn recorded a series of songs for an EP.

Within 48 hours of the duo’s first song (online via SoundCloud) won them Band of the Week with airplay on Danish National Radio (DR). In february the international blog Hilly Dilly discovered Teenage Love and wrote:

“The electronic-led production on the piece is ambitious, playful, unfamiliar, and sporadic, and with the two lead vocalists playing occasionally off of each other in harmony, there’s a sense of fun surmised that simply can’t be duplicated with any other act out right now.”